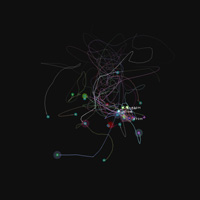 Developed over a one year research project at Middlesex University's Lansdown Centre for Electronic Arts, AtomSwarm is a platform for sonic improvisation based on the swarming behaviours seen in large groups of insects or birds. Within these collectives, each individual operates under a set of very simple rules, but the swarm as a whole appears to exhibit astoundingly complex and adaptive behaviours, capable of responding rapidly to new environments.

In addition to the physical rules governing their movements and interactions within the Euclidean swarm space (extended from Craig Reynolds' Boid algorithm), each agent's behaviour is determined by a static genome and a set of virtual hormones.

In live performance, the swarm's behaviour is manipulated by a human conductor, who can affect its population size and interactions but can never exercise complete control; his instructions are always subject to the same constraints as the other physical laws of the swarm environment.